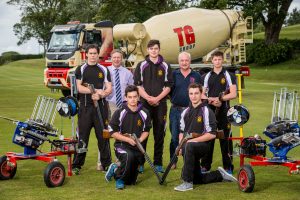 Tudor Griffiths Group has joined forces with a school’s shooting academy to enable students to benefit from Olympic standard equipment and hone their competitive edge.

The company is supporting the team at Ellesmere College to create a facility that will allow students to train in all Olympic clay target disciplines, including trap and double trap.

Managing Director Tudor Griffiths said: “Ellesmere College is known nationally for the quality of its shooting team and this support will help towards developing their clay target provision, which in turn will hopefully see it reach the same level as the rifle shooting.

“But it’s not just about supporting a local school – it’s also about supporting the local community and those who are interested in target shooting will also be able to benefit from the sponsorship.”

Ellesmere College has consistently finished in the top five teams at the Ashburton Shield, and took the national title in 2015. The academy has recently produced nine international shooters, including two selected for England and a number for Wales at junior level.

Shooting Coach Tom Ryland said: “We thank Tudor Griffiths Group for their investment and, along with the electronic targets purchased with the support of the parents’ society and the Enhance Ellesmere project, we can provide the school with probably one of the best facilities in the country.

“Our facilities are already used by the local community through our links with Pentathlon GB, and our weekly modern pentathlon training attracts a number of children from the local area.”