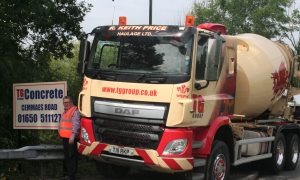 Tudor Griffiths Group has invested in two new concrete plants to extend its reach to customers even further afield.

And now, the division has acquired a plant from Hanson at Cemmaes Road, near Machynlleth, and the company is also building a brand-new plant in Bridgnorth.

TG Concrete General Manager, Dave Morris, said the investment in new plants had been made to keep up with increased customer demand and to reach new customers in a wider geographical area.

“We’re very pleased to be taking on the Cemmaes Road plant which was built in 1966 and which has been closed for some time. It’s in an excellent position midway between two of our other plants at Aberystwyth and Newtown, so it will help to boost our presence in Mid Wales.”

The second plant is under construction right next door to the TG Builders’ Merchants branch at Chartwell Park, in Bridgnorth.

“Our aim is to have the Bridgnorth plant up and running later this summer, and work is progressing very well on site,” said Dave.

Tim Hall has spent his entire career in the aggregates industry. He was previously CEO of Breedon South, director of Tarmac Limited’s Western Area, managing director of Tarmac Western Limited, and he spent 27 years with Nash Rocks. He is also a non-executive director of SigmaRoc.

The Bridgnorth plant will be capable of producing 70 cubic metres per hour, and will have four aggregate bins and three 80-tonne storage silos so that we can produce a number of classes of ready-mix concrete, as well as our newly-launched TG Cemfloor liquid floor screed. It will also have a pan mixer to accommodate collect customers.

“To be able to design and build the plant from scratch means we have been able to create facilities that suit our requirements perfectly. We’ve paid special attention to the environmental impact of the site too, making special arrangements to harvest water so that it’s an entirely recycled water plant.”