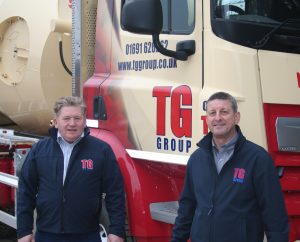 Concrete specialists at a Shropshire firm have welcomed a new sales executive to their team who has over 25 years’ industry experience.

Paul Redmond is the latest new face to join the ever-growing team at Tudor Griffiths Group, in Ellesmere, and his appointment is as a direct result of an expansion programme for the concrete division.

“We already have concrete plants covering the majority of Shropshire, Cheshire, and North and Mid Wales. And now, we have acquired a plant from Hanson at Cemmaes Road, near Machynlleth, and we’re also building a brand-new plant in Bridgnorth.

“The investment in new plants has been made to keep up with increased customer demand and to reach new customers in a wider geographical area. As part of this expansion, we’re very pleased to welcome Paul to TG Concrete who will be directly responsible for reaching new customers far and wide, and in particular, he will be working hard to bring in business for our two new plants.”

Paul began his career in the construction industry in the mid-1980s, and has worked for many major names including ARC Premix, Hanson, Synthetic Industries, and Propex, during his 25 years in the world of ready-mixed and fibre concrete.

“I’m delighted to have joined TG Concrete at such an exciting time, with so many ambitious plans for expansion, and I can’t wait to meet customers both old and new, and to get out on the road to bring in new business.”

The Cemmaes Road plant is positioned midway between two other TG Group plants at Aberystwyth and Newtown, and will help to boost the company’s presence in Mid Wales.

The second plant is under construction right next door to the TG Builders’ Merchants branch at Chartwell Park, in Bridgnorth.

“To be able to design and build the plant from scratch means we have been able to create facilities that suit our requirements perfectly,” said Dave. “We’ve paid special attention to the environmental impact of the site too, making special arrangements to harvest water so that it’s an entirely recycled water plant.”