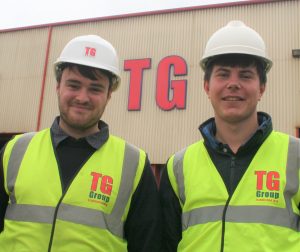 A loyal employee who joined a Shropshire company straight from school has worked his way up to a managerial post.

Russell Williams joined Tudor Griffiths Group in Ellesmere at the age of 16, and now at just 23, he’s been promoted to waste and recycling manager.

“I’m delighted to have been given the chance to make such great progress in such a short time, and I’m really enjoying the challenge of leading a busy and close-knit team,” he said. “Tudor Griffiths Group have been incredibly supportive during my time here, and it’s an opportunity that shows they have real faith in my capabilities.”

Russell initially drove heavy plant equipment for the firm including excavators, dumpers and tractors, before being promoted to a supervisor’s role in the Materials Recovery Facility (MRF) team.

Now he is responsible for the entire MRF waste recycling facility, inert plant recycling, and compliance with landfill regulations.

Managing director Tudor Griffiths said Russell’s promotion was as a direct result of his dedication and commitment to the company.

“We’re very proud of Russell and his success here at TG Group, and this promotion is so well-deserved. We’re looking forward to working with him to ensure the waste recycling service goes from strength to strength.”

Russell’s promotion is part of a restructure following an increase in business for the recycling and skip hire divisions.

And the company has also seen a new addition to Russell’s team with the appointment of James Bright as a waste, sales and technical assistant.