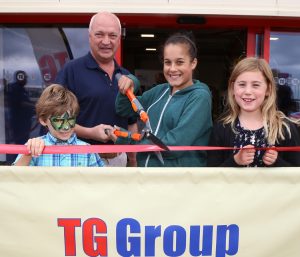 We organised the gala event to mark the opening of our Chartwell Park branch on a six-acre site and both trade and retail customers enjoyed a whole host of activities – including a visit from the famous Dulux dog!

Managing Director Tudor Griffiths said: “We were absolutely delighted with the response to our Grand Launch, and it was great to see so many people on site.”

The official opening of the branch was performed by schoolchildren from across Shropshire who won a Design-a-Garden competition that we organised earlier in the summer. Winner Issy Lear (aged 11) from St Peter’s Primary School in Wem cut the ribbon with Tudor Griffiths, along with runners up Olivia Hall (aged 9) from Shrewsbury High School and Noah Faulkner (aged 8) of Harlescott Junior School in Shrewsbury.

“We had such a fantastic response to our Design a Garden competition, which we ran in conjunction with the Shropshire Star, and we wanted to make our winner and runners-up the stars of the show on this very special weekend.”

The Friday event was aimed at trade customers, with a number of industry experts on site to offer free professional advice, as well as some promotional giveaways. Local MP Philip Dunne also joined in with the celebrations. Saturday’s celebrations were for retail customers with all kinds of children’s activities available including a bouncy castle and face painting, free refreshments, and a visit from the Dulux dog.